9 Ways Chimps Are Similar to Humans

Humans have long sought a connection to various species in the animal kingdom. Despite conflicting assertions, the fact remains that there are so many striking similarities between chimpanzees and humans that evolutionary biologists call them our “cousins”.

For one thing, chimpanzees demonstrate social behaviors that were once thought to be observed only in humans and their great ape cousins. 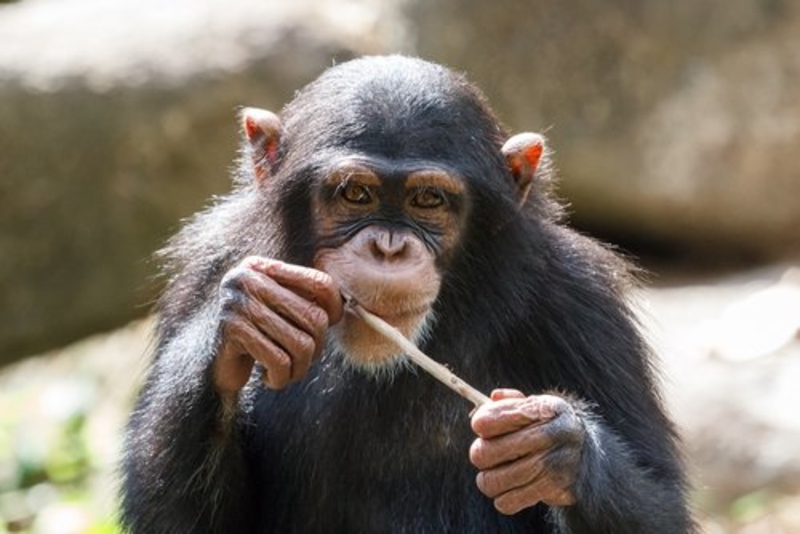 Just as young kids like to go out on summer mornings to look for other children to play with, young chimpanzees have also been observed to behave in the same way. They engage in play activities for hours, manifesting behaviors that scientists describe as “activity that produces no clear or immediate benefits — both during their childhood and their ‘youth.’”

These social games that chimps take part in will eventually help them form social relationships and enable them to learn about the value of cooperation. As in the case of their human counterparts, the games can get a little more ferocious as chimps grow older.

Yes, they smile, too

Human beings smile for different reasons; we usually put on a smiling face when we greet our friends and colleagues, we smile for the cameras, and sometimes we smile in response to a happy memory. While chimps don’t possess the level of technology that humans are capable of, they do smile as much as we do.

The repertoire of facial expressions can range from a quiet smile, a face-splitting grin (with lips pulled back to show their teeth), to wide smiles accompanied by audible chuckles, and sometimes outright laughter. 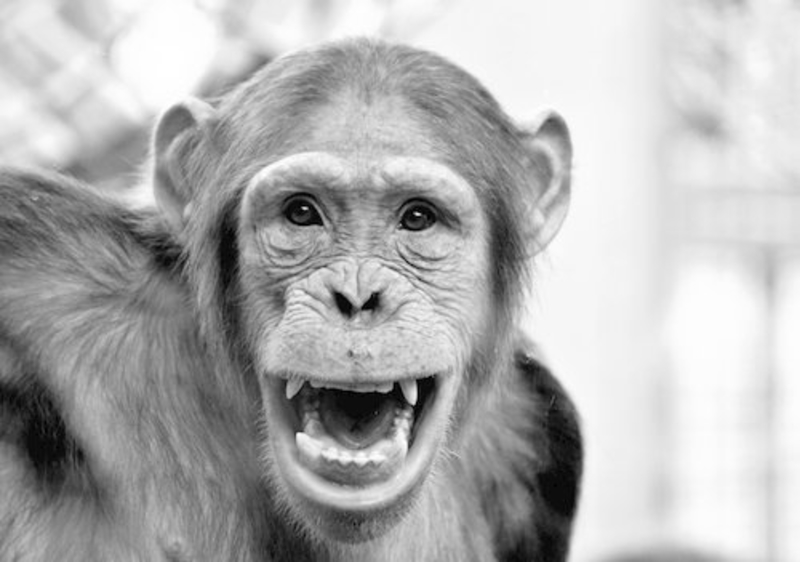 As chimps have no ready access to supermarkets and other food stores, they usually have to travel far and wide to gather food.

The fact that chimps have been observed to prefer cooked food indicates that they have at least a fundamental grasp of the transformation process when food is cooked. They just lack the capacity to control fire, although experiments have shown that they might eventually get to that point in a few years’ time.

They are cognizant of the fact that they can think

Similar to humans, chimps are capable of meta-cognition — which means that they are aware of and can understand their own thought processes.

This enhanced understanding also makes them aware of the knowledge that they do and do not possess; their capacity to differentiate between the two enables them to react and behave accordingly.

They understand the concept of fairness and morality

For quite a long time, humans believed themselves to be the only creatures who knew about the notion of morality. As with most things, that belief turned out to be a fallacy, as researchers have noted that chimps also judged each other in a similar manner. For example, if specific behaviors elicited a negative effect on babies, other chimps usually react with indignation and fury.

Through extensive research, observers from the University of Zurich were able to determine that these primates’ sense of morality was on the same level as that of humans. They are even known to exhibit a shared disgust for injustice.

According to these researchers, “For chimpanzees — who are very cooperative in the wild — being sensitive to the equal distribution of rewards represents an evolutionary advantage because cooperation benefits them.” 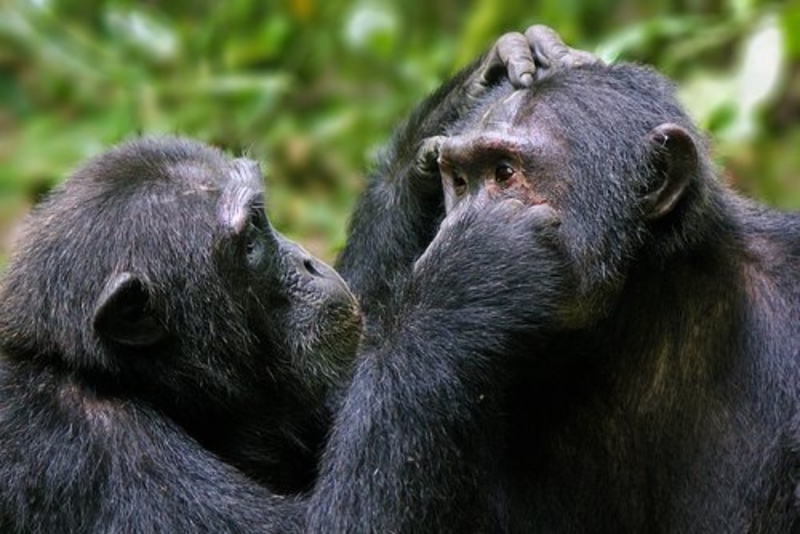 Chimps Have a Numerical Memory Span

Chimpanzees may be serious contenders for the category of “best memory for a primate.”

In Japan, scientists from the University of Kyoto conducted an experiment, in which a 5-year-old chimp displayed superior ability to remember numbers shown on a screen compared with an adult human.

Their results imply that chimpanzees may have an eidetic memory, meaning they have the capacity to remember in detail most of the things they have heard or seen.

They know how to wage war

Territorial fights are not unique to Homo sapiens. In fact, groups of chimpanzees in the wild have been known to launch large coordinated assaults against enemy groups.

Attacks of this nature usually take place in areas with a denser population of chimpanzees, and those with a higher number of male chimps.

They know how to make friends

Following a comprehensive study, Filippo Aureli (a behavioral researcher) made the conclusion that chimpanzees have pals who are “unrelated individuals who spend time with them… also help them in cases of confrontation, sharing food and collaborating.”

Like their human counterparts, chimps choose their friends on the basis of shared personality traits. 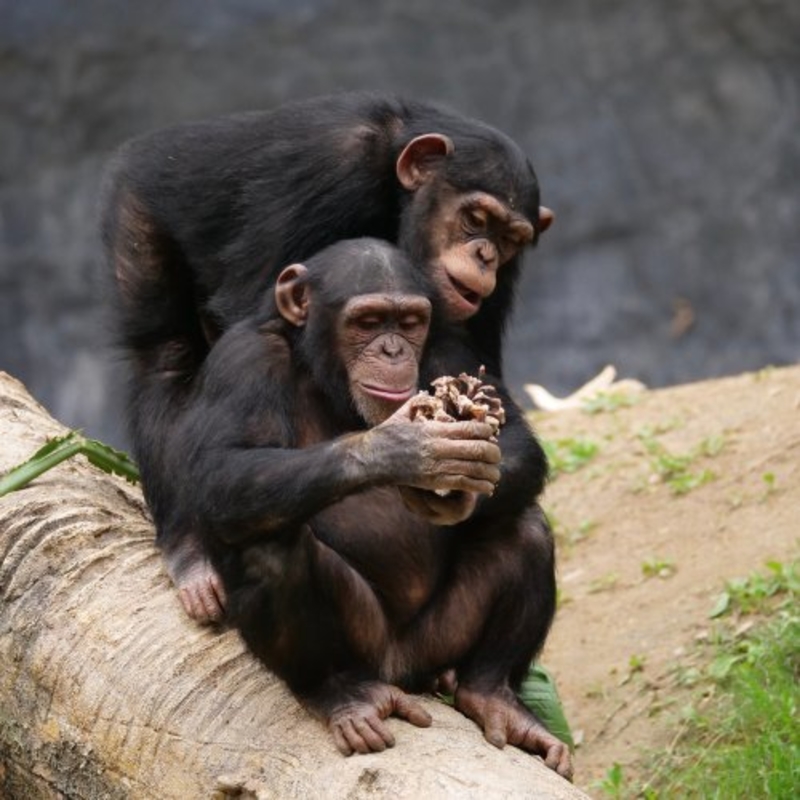 They know how to use tools

After learning that chimps have the capacity to reflect on their own thoughts, it should surprise no one to know that they have also developed the skill of using tools. This was first noted in 1960, when several chimpanzees were observed to use sharpened sticks to look for termites in dirt mounds.

Chimps were also reported to fashion spears, utilize ground leaf pulp as sponges, and use stones as anvils and hammers.

Rescue Dog Becomes A Mom To 3 Orphaned Kittens
Rescuers from the Sunshine Dog Rescue found a poor girl wandering near a US-Mexico border gas station. They named her Georgia, and when they found her, she was barely getting..

Why Your Cat Thinks Your Belly Is Playdough
You get comfortable lying on your couch with your favorite snuggie, about to return to the show you're currently binging. Then, like clockwork, your cat joins you, only..