Mantis Shrimps are Terrifying, Here’s Why

December 29, 2021 | Dana Ben Arye
Share on Facebook
The Mantis Shrimp is not quite a mantis and not quite a shrimp. This unique aquatic creature is anything but shy, and it would always prefer to stand out rather than getting lost in the crowd. Despite their small size, these shrimps are truly aggressive. Don’t let their vibrant colors fool you, while the mantis shrimp might look like it is about to hit the club, it is extremely deadly, as it clubs its prey with great force and no mercy. Now that you know this creature has a lot more than the colors that meet the eye, get ready to read some crazy facts about it. We can’t promise you’ll be able to sleep after this. 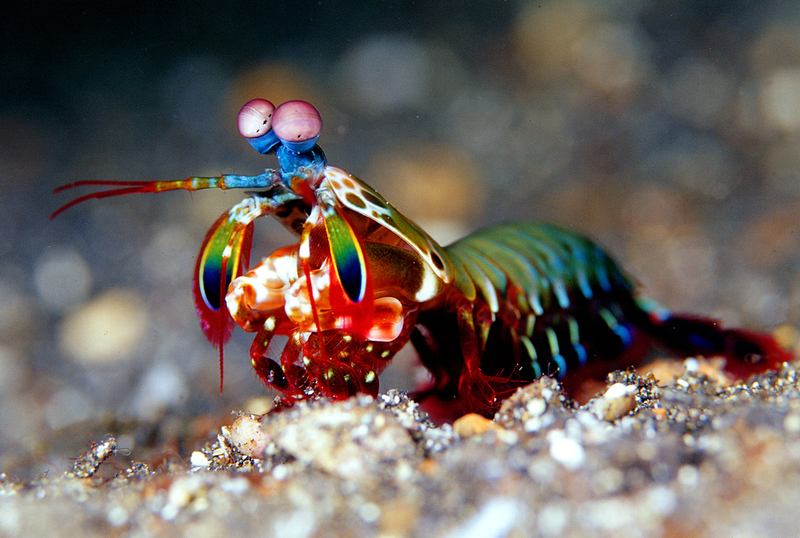 Shutterstock
As we’ve mentioned before, the mantis shrimp isn’t known for its kindness. It can strike with amazing force and can even wound humans if not handled properly. Depending on the type of claws they have, mantis shrimps are either ‘spearers’ or ‘smashers’, and neither of them is very nice. The Spearers’ claws have appendages with spiked tips which they use to stab their prey, mostly worms and fish. The smashers’ claws are club-like and can be used to smash prey into pieces. With a force of over 1,500 newtons, the smasher’s punch is as swift as a bullet and can destroy crabs and clamshells. This sadistic shrimp’s force is 2.5k times more than its own weight. If humans were able to strike this hard, they could penetrate through steel with their bare hands. 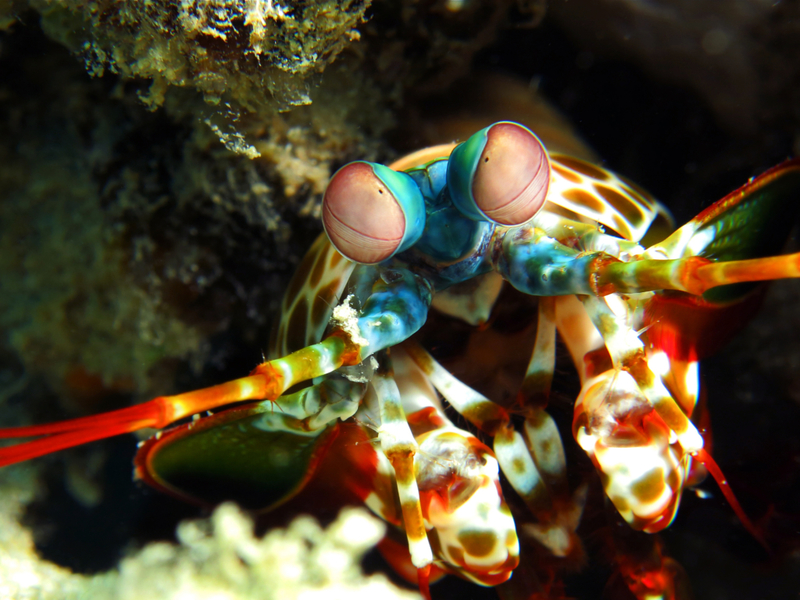 The mantis shrimp is neither a shrimp nor a praying mantis. It is its own species of the order of the Stomatopoda. Still, it got its name because of its unusual look. The mantis shrimp’s eyes can move independently and have trinocular vision. These little guys can use their eyes to accurately assess depth and distance. As far as science knows, they have the most intricate ocular system in the animal kingdom. Their eye structure has been compared to the technology used in DVD players, only far superior. With such great eyesight, you’d be surprised to learn these fellows aren’t actually that great at differentiating colors. But, who needs to be able to tell red from blue when you can detect cancer cells using your eyes? Yes, researchers presume that the mantis shrimp can use their eyes to differentiate between cancerous and healthy tissues. This isn’t science fiction you guys, it’s the mantis shrimp, so beware.