Whale Wouldn’t Leave Her Alone, She Soon Realized Why

This is the incredible story of Nan Hauser A marine biologist who was saved by a Humpback whale. The whale shielded her from a 15-foot tiger shark in the South Pacific. Her body was tiny next to him. The big the whale was probably about 46, 47 feet. The whale knew she was in danger. 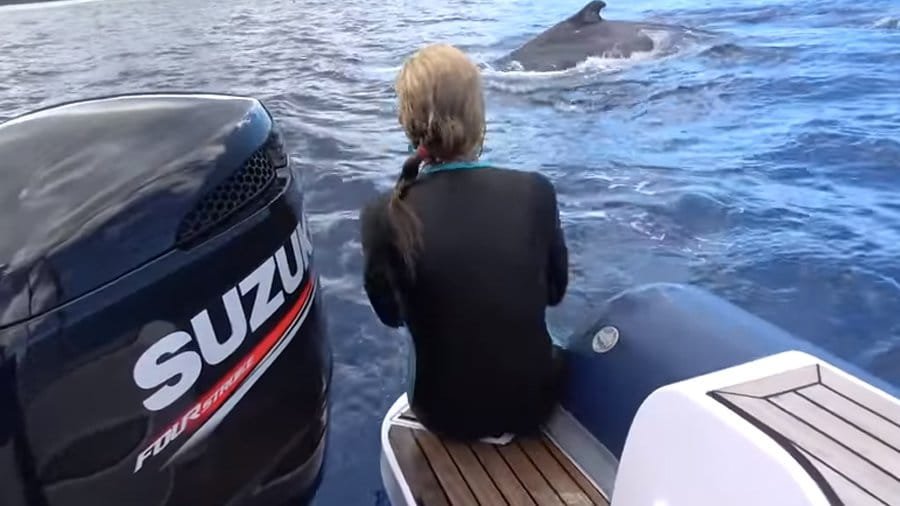 Nan’s research includes population identity, Photo ID, acoustics, genetics, surface & underwater behavior, navigation and migration of cetaceans. Her satellite tag work includes results on how whales migrate over long distances using linear constant course segments. Nan Hauser was in the Cook Island’s where her research center is based. This is in the South Pacific. Her incredible encounter with the Humpback whale accrued here.

In September, she had an encounter with a Humpback whale that was like nothing she had experienced before.  A giant, perhaps 50,000-pound Humpback swam up to her in the waters off the Cook Islands and began lifting her out of the ocean with its massive head. 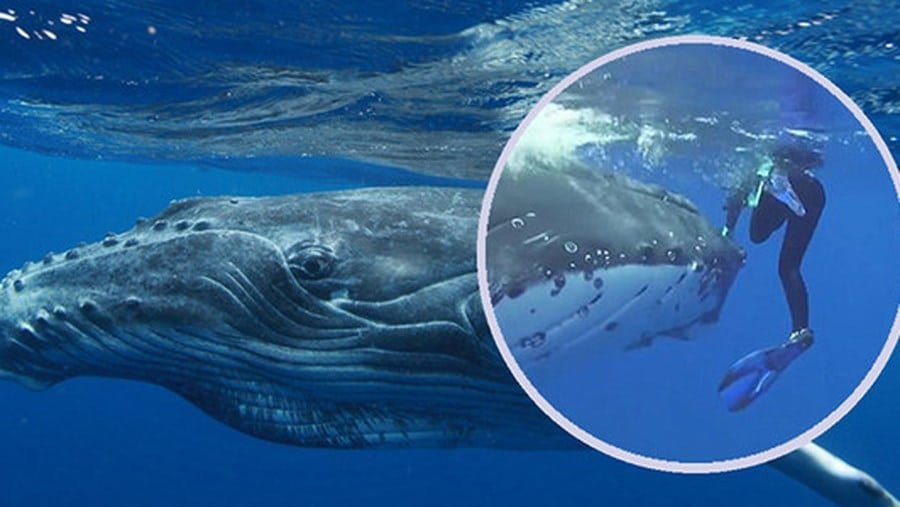 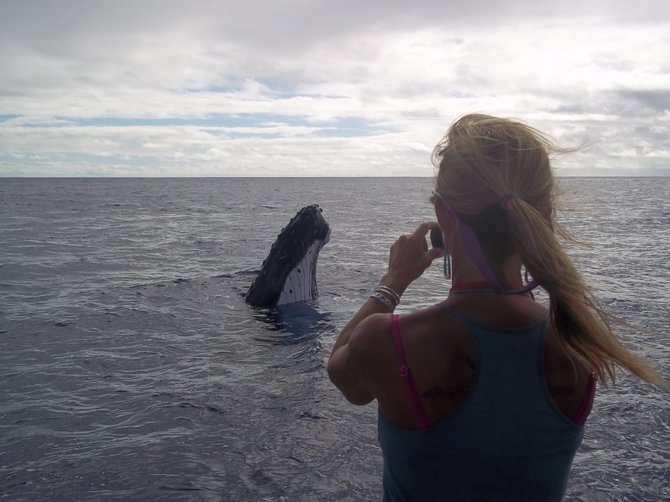 “I’ve spent 28 years underwater with whales, and have never had a whale so tactile and so insistent on putting me on his head, or belly, or back, or, most of all, trying to tuck me under his huge pectoral fin,” explained Hauser, president of the Cook Islands-based Center for Cetacean Research and Conservation. 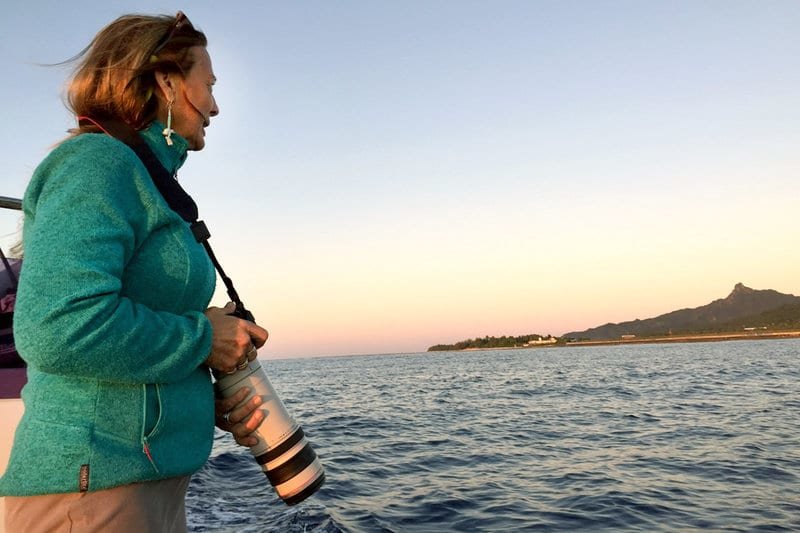 Would you let a Humpback whale beat you up to save your life? Amazingly, Hauser and her team photographed the entire encounter, which she shared for the first time Monday (Jan. 8). The footage, she is now sure, shows that the heroic Humpback is not trying to attack her, but is shielding her instead, from an even deadlier shark. 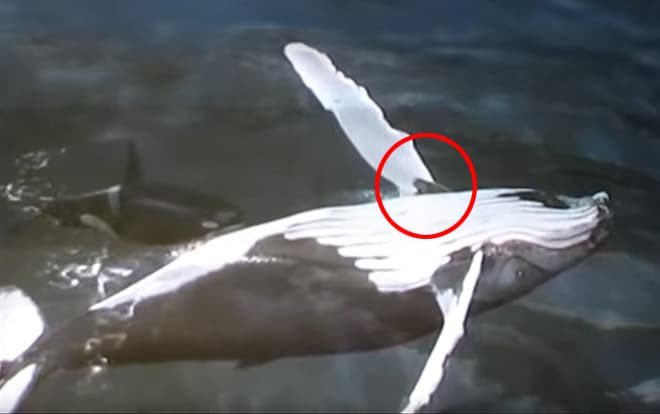 This is not the first time a Humpback whale has been observed intervening in a would-be marine ambush — in fact, the Humpback’s so-called “altruism” is well-documented. In 2009, for example, marine biologist Robert Pitman snapped an incredible photo of a Humpback cradling a Weddell seal to its chest while rolling out of the water, shielding the seal from a group of hungry killer whales.

The Humpback’s shielding impulse likely comes from an instinct to protect its own calves from predators, Pitman said. Because massive Humpbacks have little to fear from orcas, the risk of intervening in or even initiating a fight to save their young may be well worth the risk. Researchers again caught a glimpse of a Humpback’s seeming altruism in May 2017, when a group of the cetacean crusaders interrupted a pod of killer whales that were stalking some baby gray whales off Monterey Bay in California. 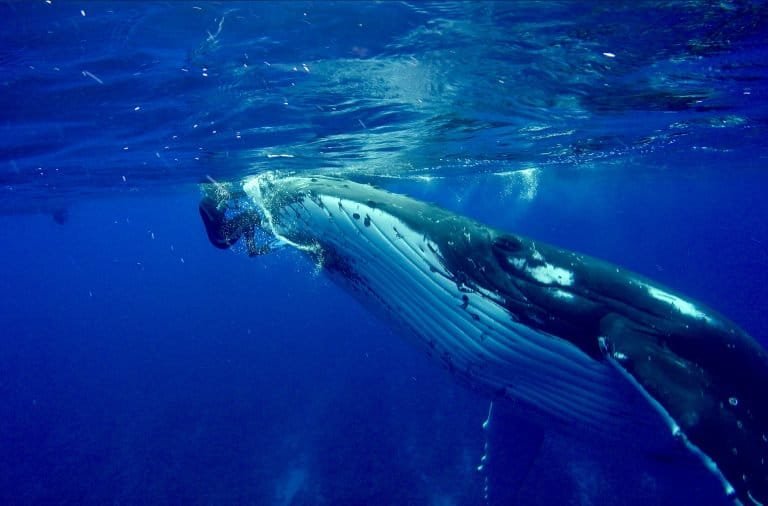 Hauser thinks it’s likely that the whale that head-butted her was similarly trying to protect her from the predator in their midst (she later learned that, while one Humpback was focused on her, another was swatting the water near the tiger shark, seemingly keeping it at bay). However, this marks the first known instance of a Humpback intervening to shield a human from a shark, Hauser said. 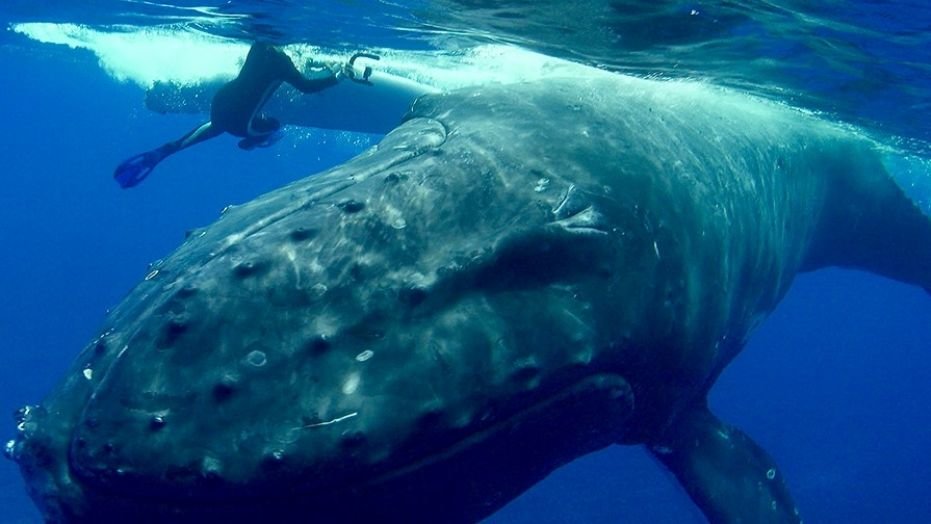 Instead of just swimming past her, he came right towards Hauser. And he didn’t stop coming towards her until she was on his head. And next thing she knew, for about 10 minutes, she was – rolling her around his body, really trying to tuck her under his pectoral fin.

“Well, I was very intently watching the whale the whole time because I was trying to get away. I did think I was probably going to die.”

“It’s highly unusual. I’ve been underwater with whales for 28 years, and this is just really unusual behavior. It’s crazy. Humpback whales are not typically dangerous animals, but any animal that big could unintentionally harm a human.  I was afraid for my safety the whole time. And I’m not afraid of whales at all. I’m afraid of little spiders. But whales I can deal with.” 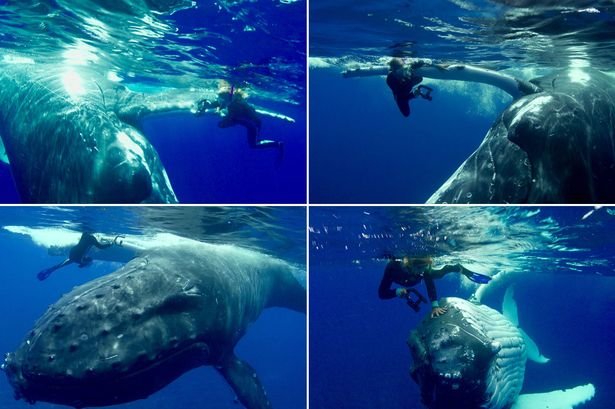 “I mean, he’s big, and so I was pretty bruised up. He wasn’t trying to hurt me. He could have. He could have whacked me with his pectoral fin or his tail. I’d be dead. I mean, he was really pushing me with the front of his mouth, too. He could’ve opened his mouth, and he didn’t do that, either. But I didn’t know he wasn’t going to do any of that.” 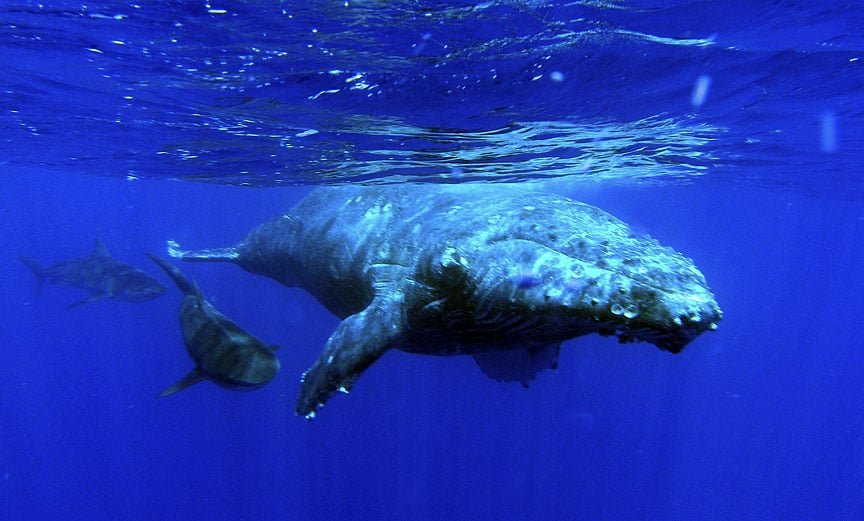 “When I did finally get closer to the boat and a little bit away from him, I looked off in the distance, and I saw another whale who was quite frantically tail slapping this other animal, which I thought was another whale.”

“I looked at it, and then I saw it swimming towards me. But it was – the tail fin was going side to side instead of up and down. So my mind quickly went, oh, my gosh. That is a shark. A shark’s tail goes back and forth. A whale’s tail goes up and down.” 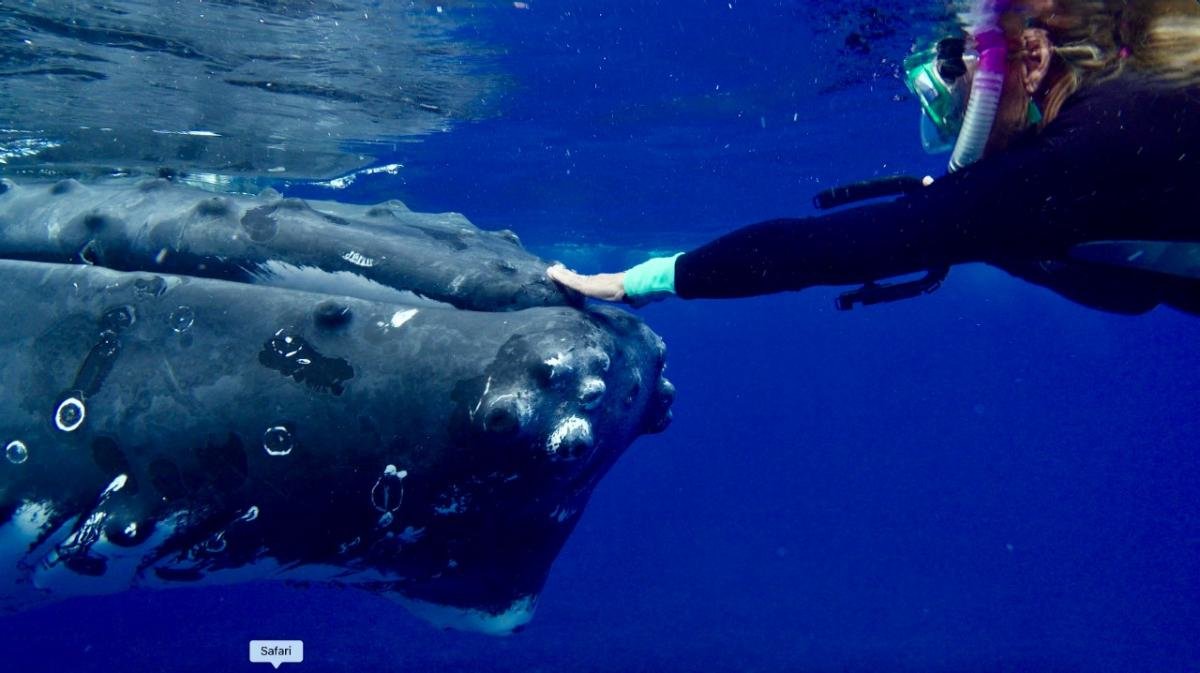 “Well, the only thing I could figure is that everything I’ve read about what they do with altruistic behavior to protect other mammals – marine mammals. And I’ve even seen them protect a little hammerhead shark before. They protect other animals in the sea from harm. I’ve just never heard of it happening with a human.” 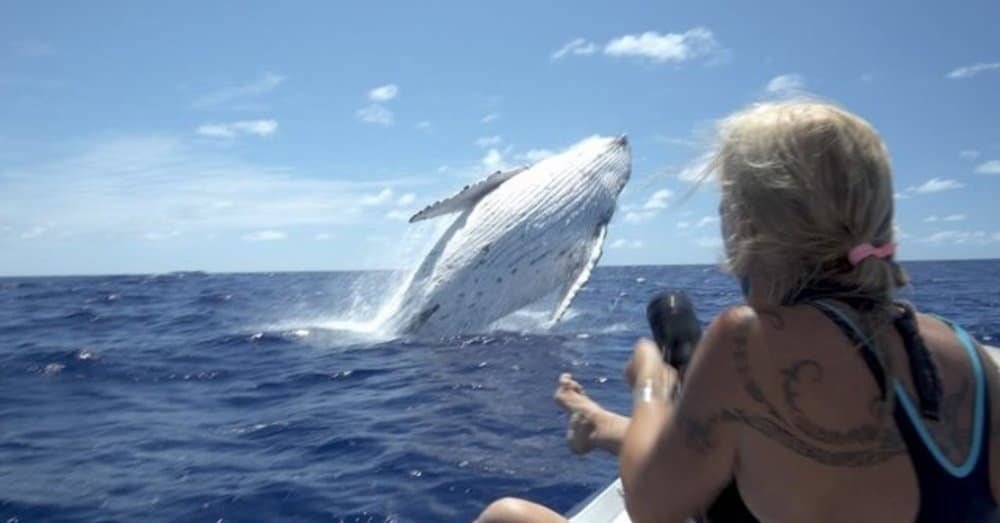 ” As a scientist, you are trained to be a skeptic. How likely is it that we are just trying to impose an anthropomorphic storyline on animal behavior that is not actually anything like whale saves a diver from a shark. If someone told me this story, I wouldn’t believe it. If it hadn’t been me, if it hadn’t been filmed in three different angles, I wouldn’t believe it. I tried a lot not to anthropomorphize any of the behavior that I see. It’s easy to do, but it’s not a good practice in science.” 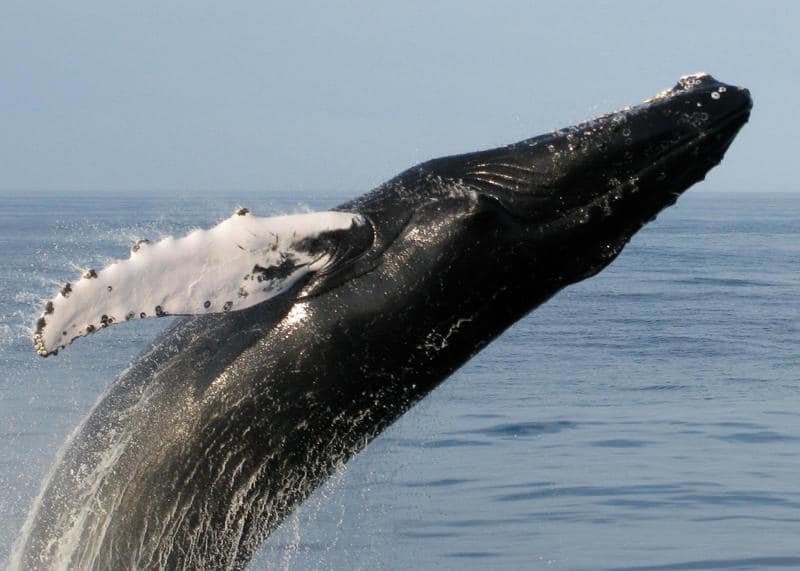 “What wasn’t written up – and this is even weirder – is that four days later, the other whale that was tail slapping came to the boat and kept spy-hopping and looking in the boat. So I got in the water, and I rolled the camera. And she came right up underneath me 4 or 5 feet away from my belly, and she put her pectoral fins out around me. And it was my birthday, and I got a hug. And you tell me any scientist that will tell you that a whale hugged them. That’s impossible. But again – three angles, three different cameras, and I got a whale hug. So I don’t even tell people that because they’ll think I’m crazy.” 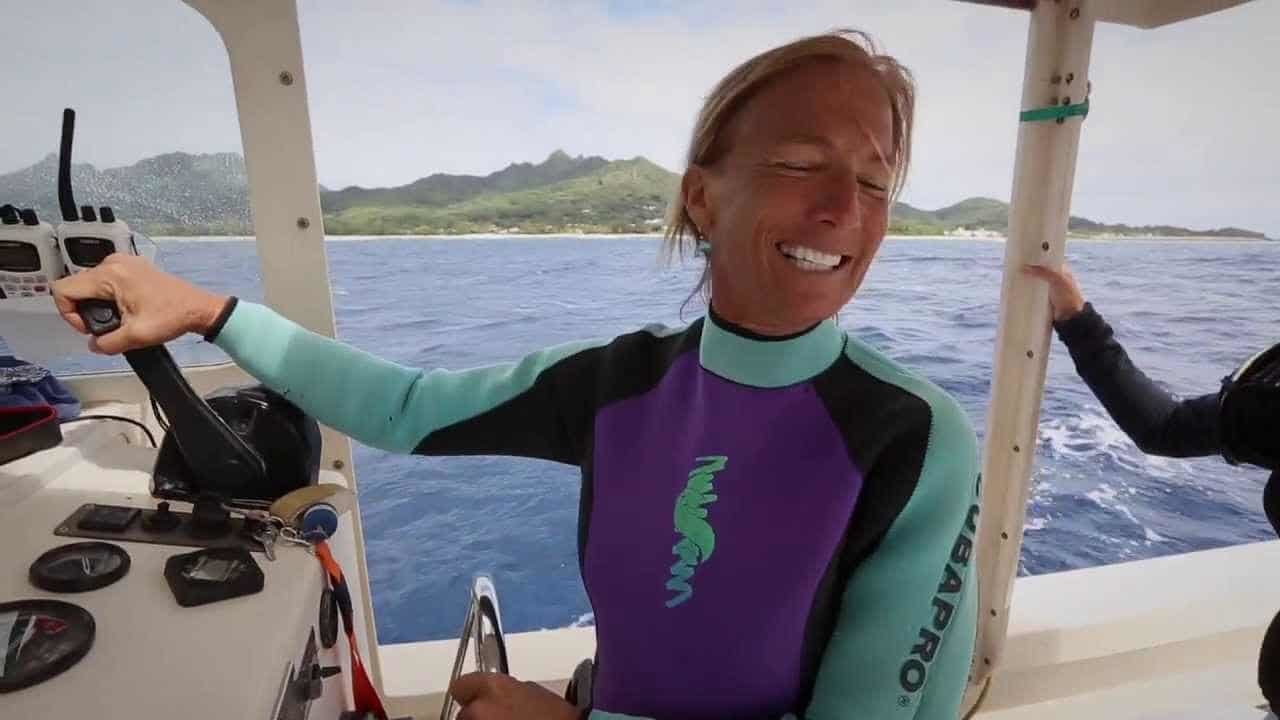 “I have certainly never been hugged by a whale in the 28 years that I have studied them. This is a basic outline of the story… there is so much more I could write about this encounter. I am truly deeply blessed and it has changed my life in so many ways. I always said that I would spend my life being a voice for whales, dolphins and the ocean and now that commitment has become even stronger!”

Better Playgrounds Could Help Kids Get More Exercise
The playground at Lake County Intermediate School in Colorado was in desperate need of a renovation. The schoolyard just had a few swings, some rusty climbing equipment, a..

Natural Remedies to Keep Fleas Away From Your Pet
Fleas and ticks have been agonizing both pets and humans ever since we started cohabiting all those centuries ago. But the chemicals we use today to rid our furry friends of..