Octopuses, those whip-smart but bizarre cephalopods, and they seem to embody everything creepy and mysterious about the sea. With their otherworldly forms, heightened by unfurling arms–the thought of their soft spongy bodies lurking in the oceans’ dark expanse has inspired us for centuries.

Yes, like chimpanzees, dolphins, and crows, octopuses are among the unique set of intelligent animals that have been observed using tools. In 2009, scientists reported they had watched veined octopuses picking up discarded coconut shells and using them as mobile homes.

The oldest known octopus fossil belongs to one that lived over 290 million years ago, during the Carboniferous period. This specific specimen belongs to a species named Pohlsepia and is on display at the Field Museum in Chicago. An in-depth examination reveals the tell-tale sign of eight arms and two eyes. This suggests that long before life on land had progressed beyond small pre-dinosaur reptiles, octopuses had already established their shape millions of years ago. 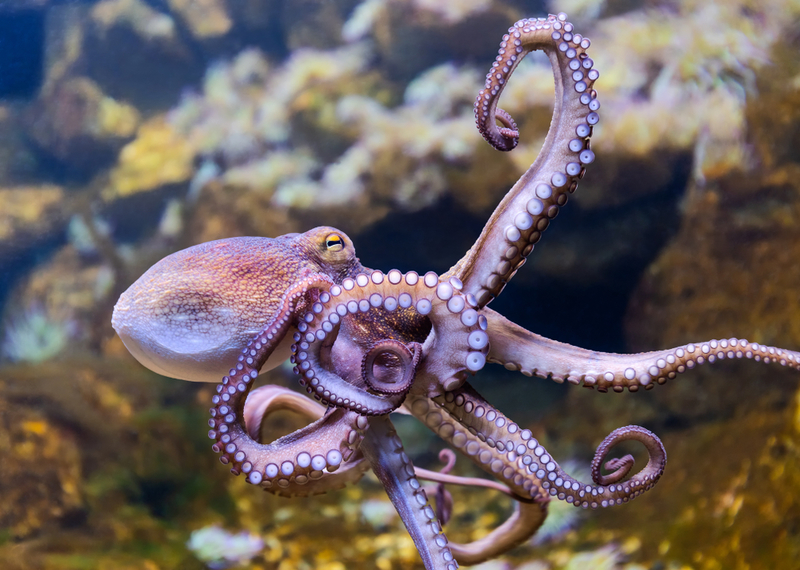 Two of the hearts work exclusively to move blood beyond the animal’s gills. At the same time, the third keeps circulation flowing for the organs. The organ heart stops beating when the octopus swims, explaining the species’ penchant for crawling rather than swimming, which exhausts them.

Octopus Have Their Minds in Their Arms

Most of an octopus’ neurons reside in its arms, not its head. As a result, their arms can solve problems like how to open a shellfish while they are busy doing something else, like inspecting a cave for more edible goodies. Their arms can even react after they’ve been completely severed.

Octopus Ink Does More Than Hide Them

Ink can also physically harm their enemies as it contains a compound called tyrosinase, which brings about a blinding irritation. It also confuses the creatures’ sense of smell and taste. The defensive concoction is so potent that octopuses that do not escape their own ink cloud can die.

Octopuses developed a copper rather than iron-based blood called hemocyanin, which turns their blood blue. This copper base is more effective at transporting oxygen than hemoglobin when there is not much oxygen around, and the water temperature is very low. But this structure also causes them to be hypersensitive to changes in acidity. If the surrounding water’s pH drops too low, octopuses can’t circulate enough oxygen.

Eating the Same Breakfast Every Day Might Benefit You
Stress around breakfast — famously "the most important meal of the day" — isn't necessarily the best way to start.

Inside the Oyster: How Pearls Are Formed
When you think about pearls, you usually imagine little white spheres strung on a necklace. But what do you really know about those beautiful gems? Take a look at these fun..

What’s Worth Knowing About Animal Intelligence
Until somewhat recently, animals were deemed to be unthinking creatures, while humans were the only truly intelligent species. But supported by new experiments that allow..