April 17, 2021 | Michelle Muller
Share on Facebook
You might be familiar with less-common winter sports, having tuned into enough Winter Olympics to retain a few sound bites about skeleton racing and curling. Maybe you’re even a lover of the obscure art of ski ballet. But that doesn’t mean you’re familiar with skijoring, which begs the question: Do you love your dog enough to take them skijoring?

Kadmy - stock.adobe.com
Skijoring comes from the Norwegian word to ‘skydive or skikjøring. You’re standing on cross-country skis, holding onto a rope, the other end of which is your dog’s leash, or maybe even a couple of dogs. According to the director of marketing and communications for the American Birkebeiner Ski Foundation, Nancy Knutson, skijoring has been around for hundreds of years, going back to when animals and skis were both mostly used for transportation.

Can You Skijorn in the US?

Skijoring has very much been a thing in the US for at least the past century. It hasn’t yet broken into the mainstream, but you can watch skijoring races at wintery family-friendly festivals, which is still on for 2021. Every year around February in Hayward, Wisconsin, you can find skijorers and their dogs dashing down Main Street in the annual Barkie Birkie Skijor. Whitefish, Montana, hosts the yearly World Championship each January, though unseasonable weather derailed it last year.  This leads to our next question:

Can I Skijor With My Own Dog?

We now turn to the question we are all itching to ask—and the answer is yes, as anyone who has a dog who has encountered a squirrel while cross-country skiing can probably attest. Those of you wanting to BYOD will need a dog weighing around 35 lbs, which is generally healthy and at least one year old. And you should be at least somewhat comfortable on cross-country skis. 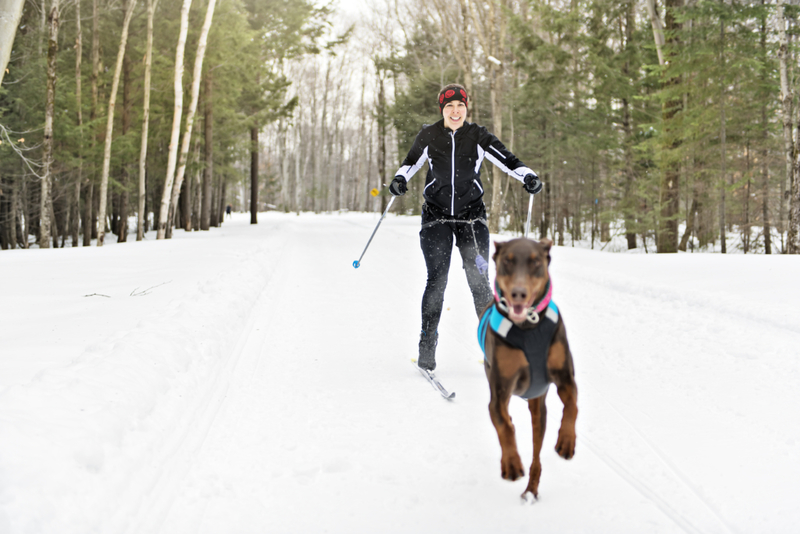 Here are a few parks you and your furry friends can enjoy:
Triple Creek Ranch, Montana Equestrian skijoring, like anything equestrian, is a bit more widespread in Montana than it is many other places around the country. No matter your skill level, guests at Triple Creek—near Montana’s western border—can even try skijoring with a horse as one of the ranch’s all-inclusive activities.
The Resort at Paws Up, Montana
This incredible resort of 37,000-acres is surrounded by dense national forest land only recently introduced skijoring to its guests, delighted them with a trail specifically designed for competitive training, resembling a kind of obstacle course. Guests from ages 12 and up can try an hour and a half of equestrian skijoring for around $200.
Loppet Foundation, Minnesota
If you have your own skis and dog, expert skijorer Torrey Swanson will lead you in a free introductory session, followed by a session out on the snow, which will cost you $40.
Devil’s Thumb Ranch, Colorado
For those of you longing to try skijoring with a dog rather than a horse, this ranch will rent you doggy-skijoring equipment for only $20, plus they have regular clinics to help you improve your skills. Feel free to enjoy the many miles of trails nestled around the base of Colorado’s Continental Divide.

How to Make It Through Your First Yoga Class Without Feeling Silly
People have all kinds of reasons for not wanting to join a yoga class. Everything from "I'm not flexible enough" to "yoga is so weird."

The Best Sports Movies on Netflix
Why watch a movie about football when you could simply watch a great football game?